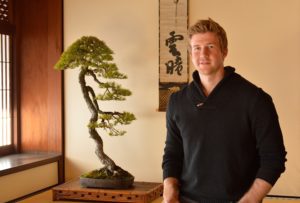 Bjorn L Bjorholm, owner of Eisei-en, is a bonsai professional and instructor who spent six years as an apprentice under Master Keiichi Fujikawa at Kouka-en bonsai nursery in Osaka, Japan before receiving certification as a bonsai professional by the Nippon Bonsai Association. His tenure as an apprentice at Kouka-en was followed by three years as artist-in-residence at the same location, making him the first foreign-born working bonsai professional in Japan. During his time in Japan, Bjorn’s works were featured in the Kokufu-ten, Sakufu-ten, and Taikan-ten exhibitions, among many others.

In addition to his work in Japan, Bjorn travels the world, from Europe to Asia to Latin America, teaching bonsai art and providing services to private clients and international organizations. He operates intensive bonsai schools with affiliate nurseries in Spain and the United States, while also working with international bonsai organizations.